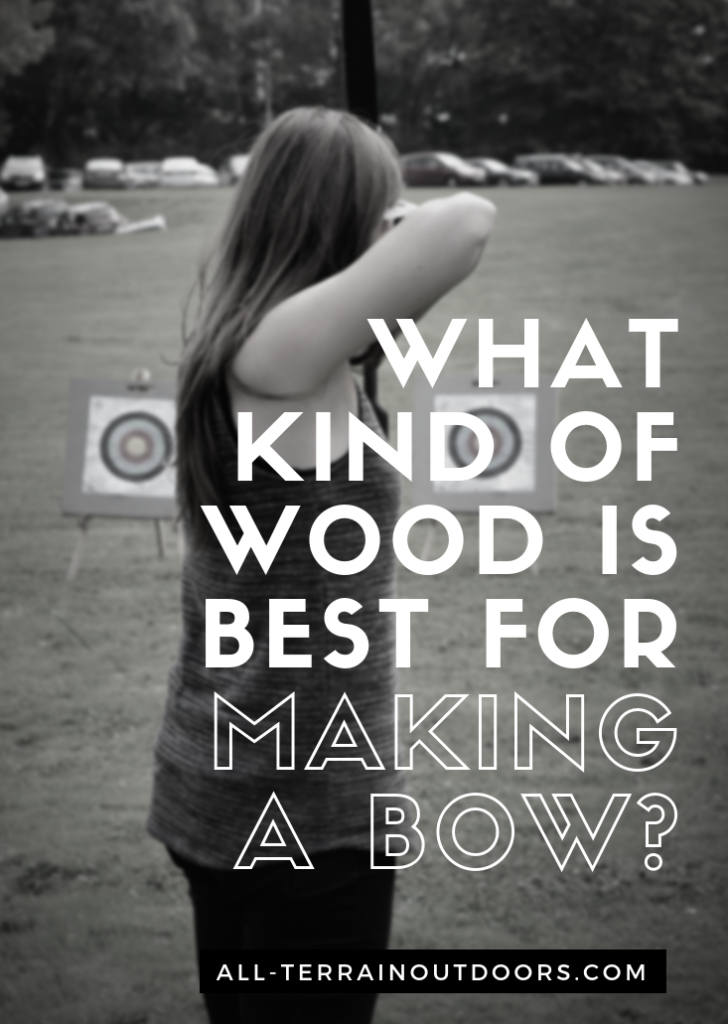 Making your own bow requires certain skills and tools, but what matters most is the kind of wood you’d choose for it.

Unless you’re a pro at designing and making bows, you might opt for any wood, albeit pro bow craftsmen will never do it.

The quality and durability of your bow greatly depend on the type of wood it’s made from.

Choosing the right kind of wood can determine whether your bow will be better with a flat bow or a D-shaped longbow.

Read on to find out what kind of wood is best for making a bow and see which one will work for you. 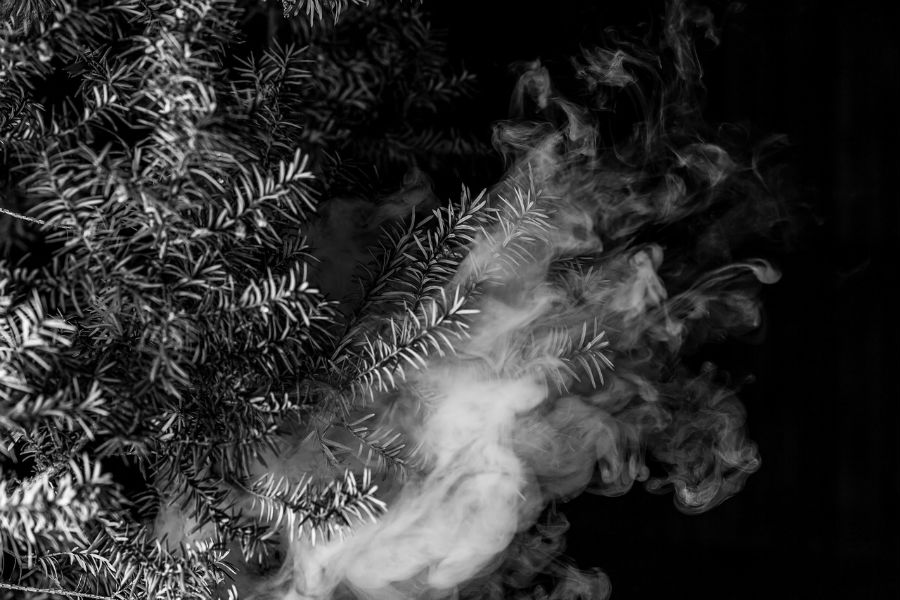 Also known as Taxus baccata, English yew (don’t confuse with European or Pacific yew) is traditionally associated with the longbow.

This wood is usually used for making simple and short-lived lightweight bows and rarely for the longbow. The reason is the seasonal changes.

Just like any tree, when English yew wakes up in the spring, it enjoys a growth spurt and an early growth, and thus, softwood.

The early-growth Taxus baccata is flexible and soft and it seems to be the best wood for your bow, but wait a second.

The authentic, bow-friendly English yew is extremely expensive and hard to find.

The one growing outside your backyard might become too brittle to bend as it tends to dry if you get it in the wrong season.

However, when English yew is still quite wet and almost green, it’s possible to make a sturdy D-section bow.

Don’t expect it to serve you for years, though.

In the beginning, the wood is supple, but over time it might start drying, becoming stiffer and harder. As the bow gains weight, it might become brittle.

In order to make this bow last, it’s important to learn how to care for it correctly. 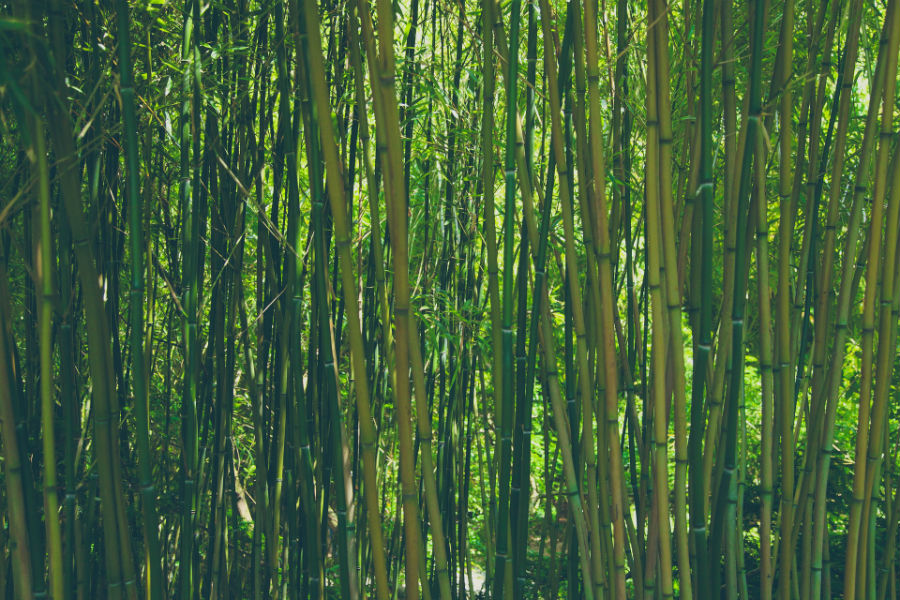 Unlike English yew, bamboo is easier to find and it’s a lot cheaper.

Moreover, if you follow the right techniques and make a bamboo bow, you can be sure that it will serve you for many years.

Although a bamboo bow requires more effort, time, and work than other woods, it’s all worth it.

For example, an expert bowman Howard Hill used this trick when making his bamboo bows.

If you’re going to design your own bamboo bow, allow the outer surface to serve as the belly to keep the set in balance. 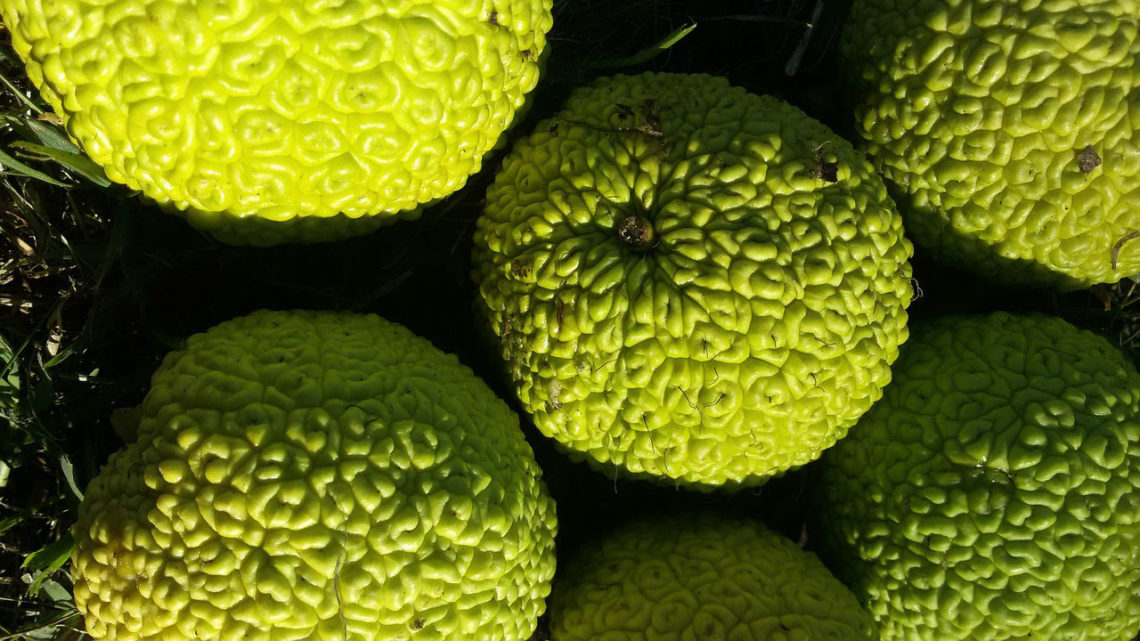 Those who use bows made from Osage orange would tell you that these bows are among the best ones in all of archery.

The thing is, Osage orange boasts excellent tensile abilities and a great compression strength that ensures the balance.

Even when buried, Osage orange doesn’t rot. This wood can perfectly bend if it’s affected by the heat.

Due to its good flexibility, Osage orange can be used in a lot of bow designs, including those made for beginners.

The biggest drawbacks of this wood are that Osage orange is highly expensive and hard to find.

Moreover, this wood might cause allergic reactions, if you’re prone to allergy. 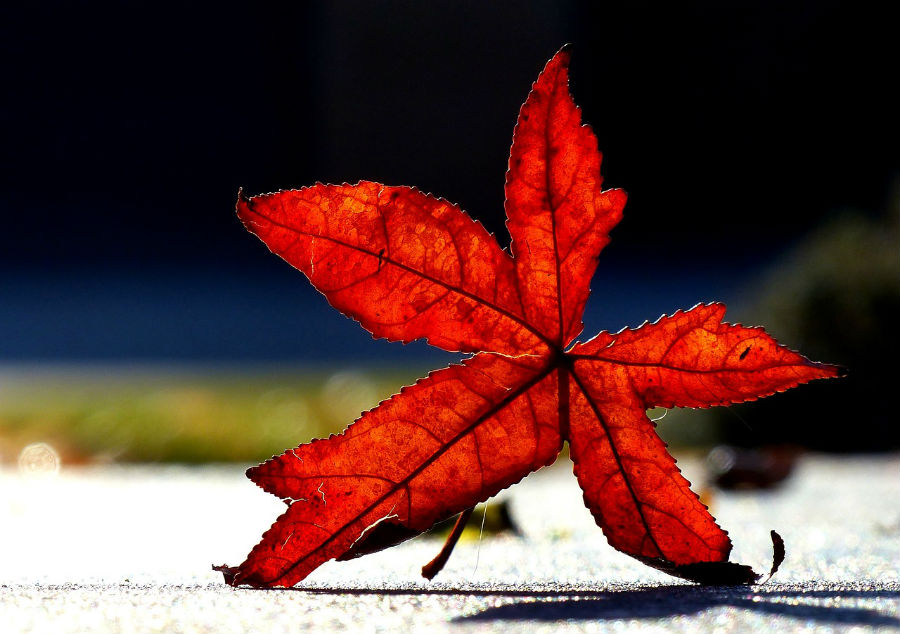 One of the best things about choosing red oak for your bow is that it’s inexpensive and easy to find, depending on where you live.

This type of wood is highly porous, particularly in the earlier growth rings.

That’s why it’s critical that you choose a thick piece of red oak with late growth rings, as they tend to be less brittle.

The boards made from red oak are heavy, but it doesn’t mean you should avoid them. 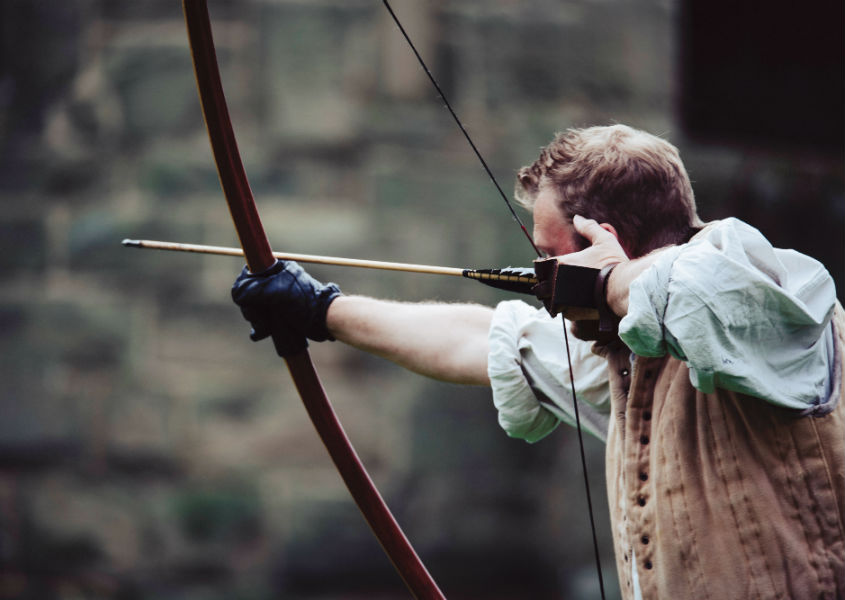 Also known as ipe, Pink trumpet tree is one of the strongest woods that will let you make lighter and thinner limbs and thus a faster bow.

When backed with bamboo, your ipe bow can serve you until you lose it.

Due to its resistance to decay, Pink trumpet tree is used in designing decks.

No wonder bowmen have used this wood for making durable bows.

If you sneeze or you’re prone to allergies, be careful and test this wood before working with it. 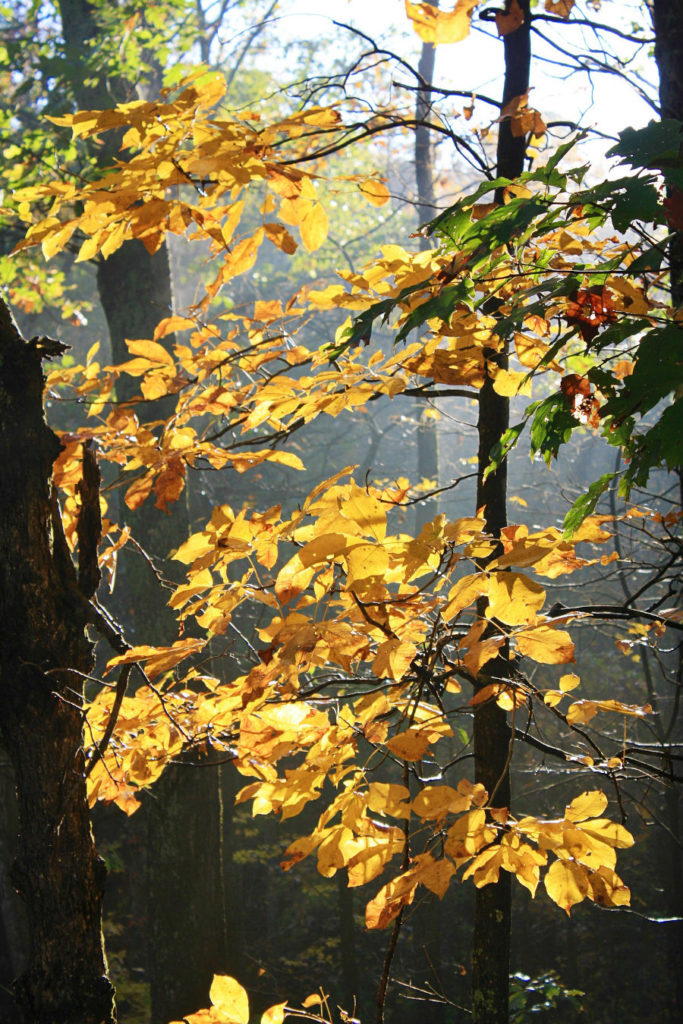 Being a relatively new type of wood for bowmakers, hickory has already won the attention of bowmen.

Hickory is easy to find and ridiculously cheap.

It also has a strong tension, creating the ideal backing and can tolerate more wood run than other types of woods on the list.

Hickory is perfect for making a self bow. Like bamboo wood, hickory has prominent tinsel strength and it should be thin to craft your own bow.

The bowmen who already use hickory bows boast about the durability and convenience of such bows.

The drawback is hickory might have an increased rate of moisture absorption and therefore it’s not suitable for shooting in a damp environment.

Moreover, over time, hickory might become more sluggish and even brittle. 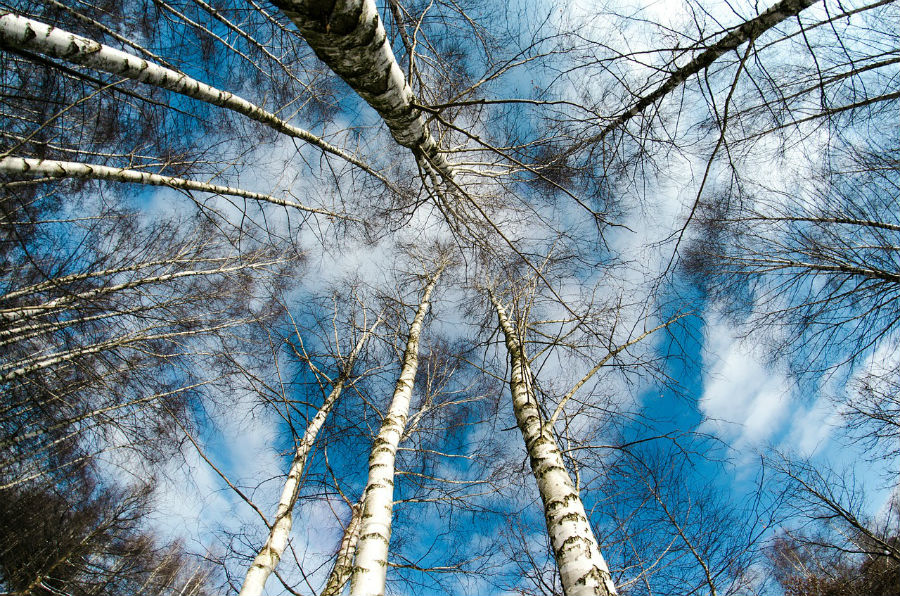 If you live in a place where a birch tree isn’t a rare tree, you can try to craft a bow out of it.

Depending on where you live, this wood might be either very cheap or very expensive, so consider this factor when choosing the wood and do your research first.

The bowmen claim that birch is much weaker than the majority whitewoods.

There are several species of birch, including yellow birch, which is considered to be the strongest wood of all other birch species.

This wood is usually used for making a flat bow, such as a pyramid bow. 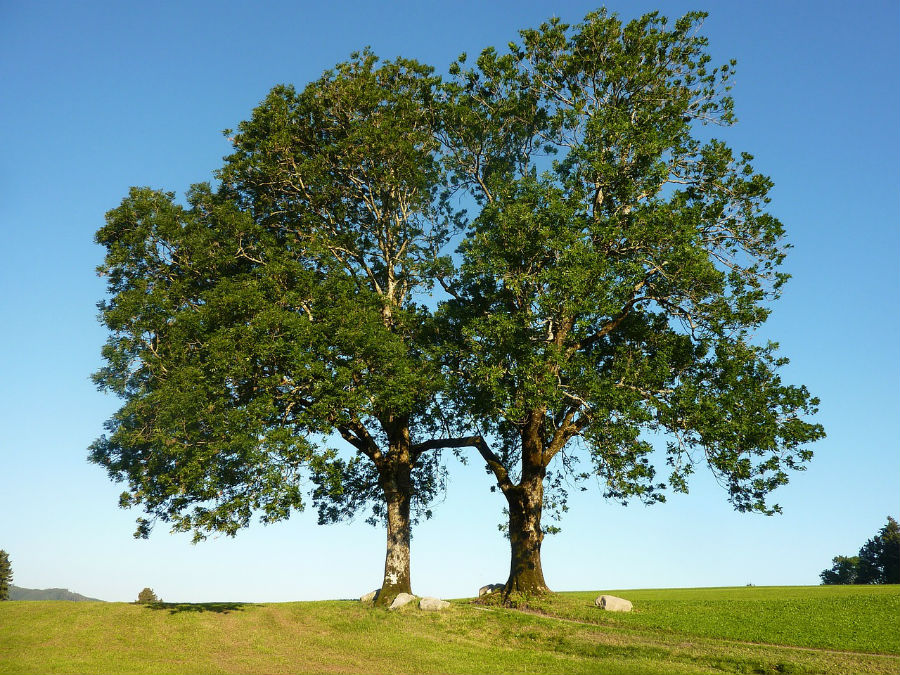 Like wych elm, ash has been long used for making bows.

This wood is used for making an enhanced broad-limbed flat bow instead of a D-section longbow design, albeit it’s up to you.

This is a ring-porous type of hardwood with the late growth wood having more strength and durability and the early growth wood being stringy and coarse.

Unlike wych elm and yew, ash is typically used after being air-dried over a few years and properly seasoned, while providing a stable hardwood that works great with most sharp tools.

In spite of all the benefits, ash can cause compression cracks on the belly.

The price tag and availability of ash depend on where you live.

There is American white ash, which is totally different from other wood types like European ash.

Although American white ash is used to make bows, in most cases, they turn out not as durable and strong as the bows made from European ash. 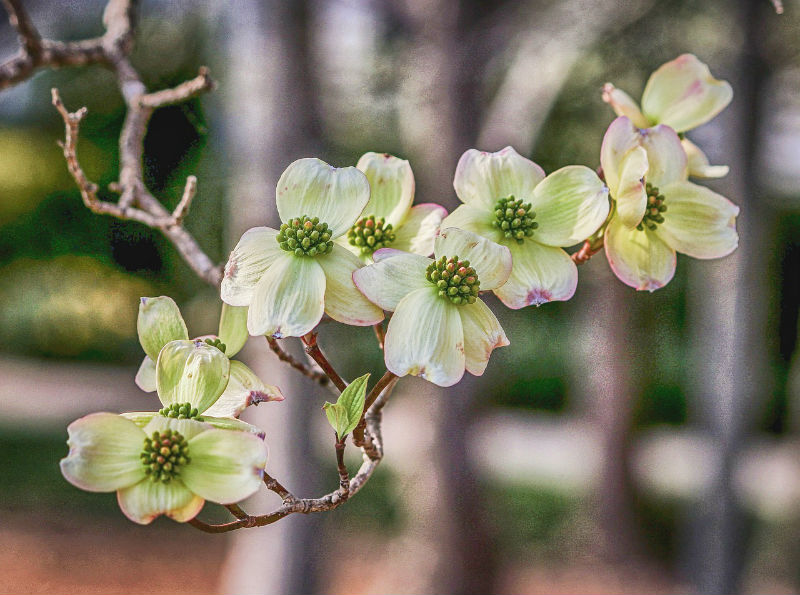 Also called cornus, dogwood is notable for its high compression, strength, and density.

But it’s very hard to find this wood and even if you find it, be prepared to spend a lot of money.

It’s tricky to find the best wood for making high-quality bows. If you want a durable bow, dogwood is a great choice. 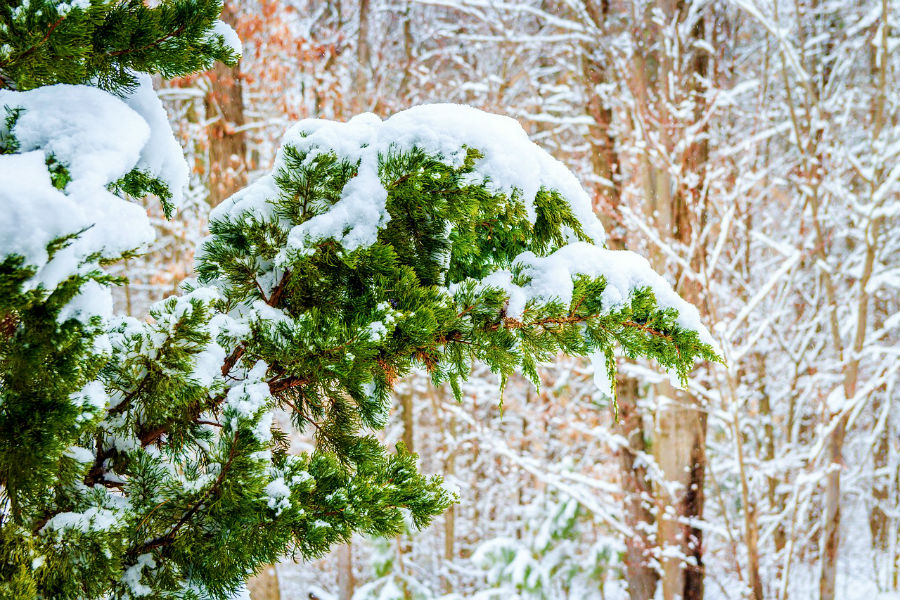 It’s a species of juniper, which is ranked the best type of wood for designing a longbow because it’s extremely light and brittle.

The weak tension and strong compression of Juniperus Virginiana make it ideal for making various longbow designs, including those with a D-shaped and cross-section.

Juniperus Virginiana might be used in crafting flat bows, however, you might have to add sinew for the back to solve the tension issue. 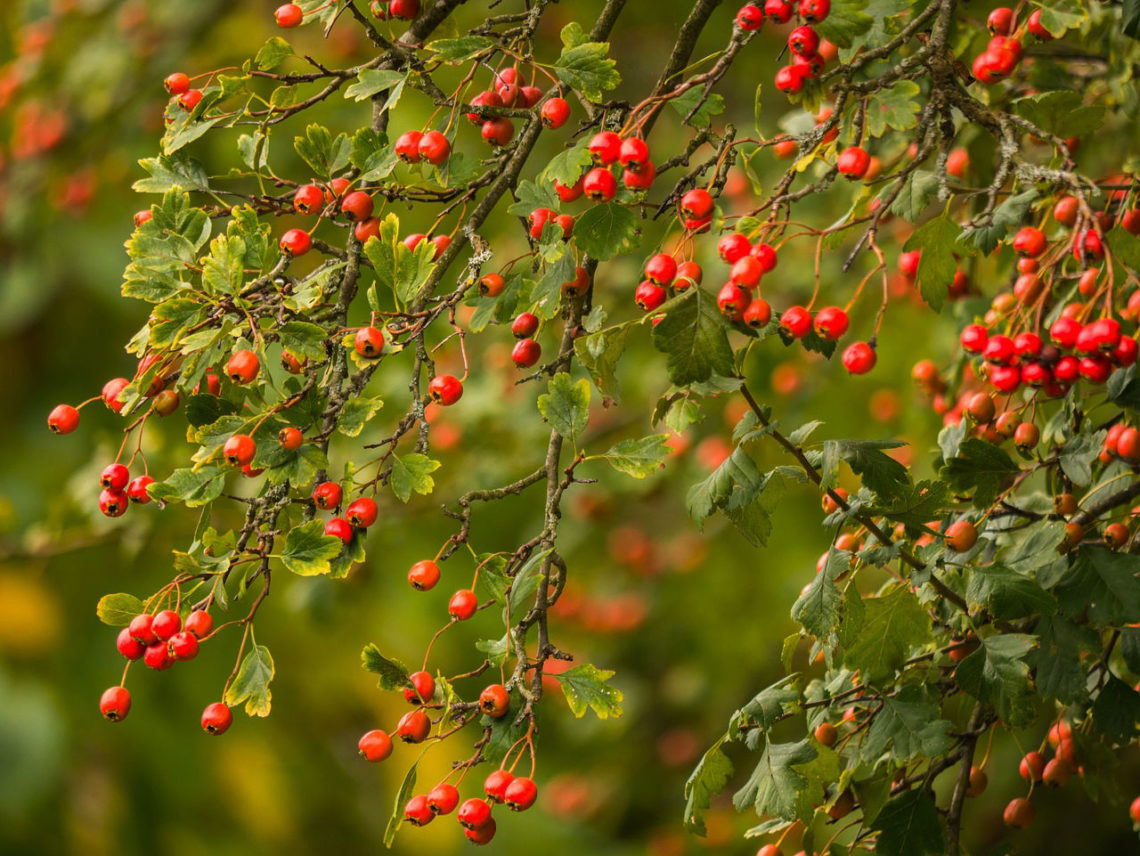 When it comes to bow making, hawthorn might be the last type of wood that comes to mind.

Unfortunately, this wood is greatly underrated yet it produces some well-sized (up to 4 feet) logs.

Moreover, hawthorn is used for creating a durable flat bow in case it’s fairly straight-grown and doesn’t have many small pin knots.

Hawthorn is a bit hard with the grain structure being interlocked and tight.

Professional bow makers use hawthorn when they create D-section bows.

Newbies might have difficulty with it as they risk following the string and failing in compression.

It’s possible to avoid this problem by designing the limbs thinner and broader.

If you feel like you’ll fail with a D-shape bow, consider a flat bow design – it’s much easier to work with. 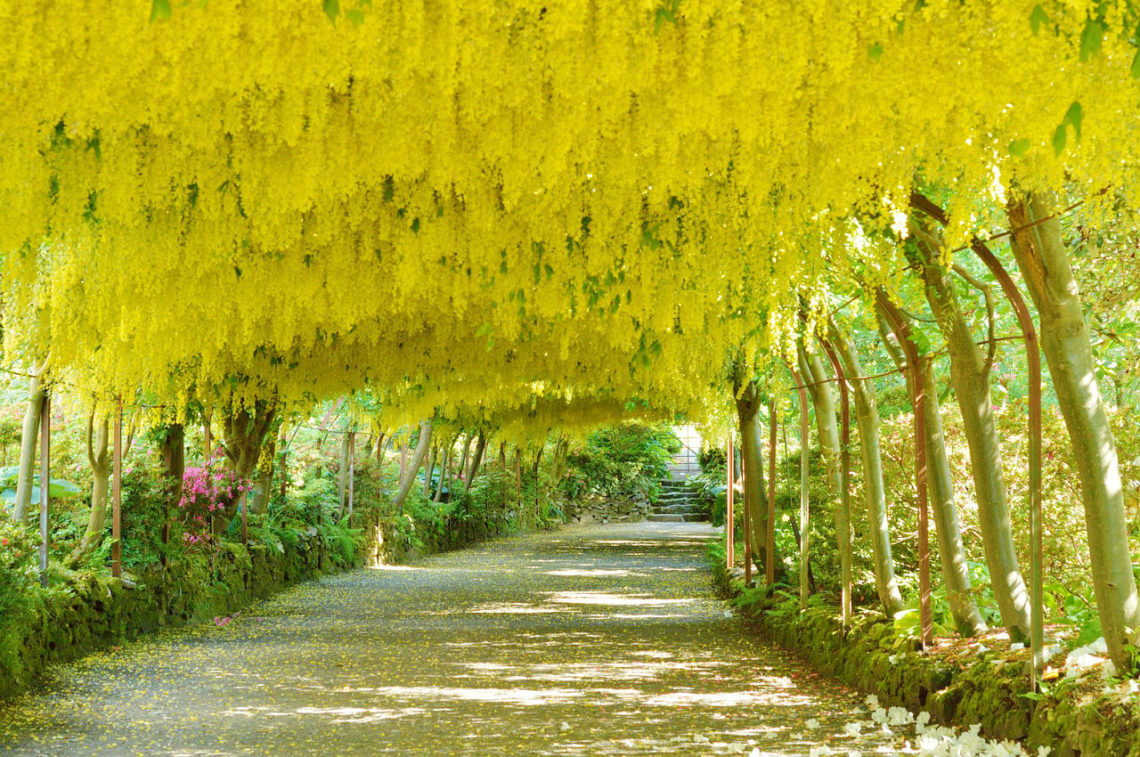 One of the rarest types of wood for making a bow, laburnum allows you to create a versatile bow.

The biggest problem with this wood is that it’s hard to find a decent length and size of the straight-grown wood.

Some bowmen opt for the yellowish sapwood instead of yew as a backing and the darker and greeny-brown heartwood, or any similar wood, as the belly.

When compared to other types of woods, laburnum can be used to make a D-section English longbow that will effectively perform for many years to come.

It’s better to make laburnum bow a bit ‘overlong’ for an increased draw length, which tends to be short.

Laburnum requires a lot of effort when it comes to making bows.

Laburnum can be backed with hickory or ash, and when laminated with a purple heart core creates quality and an attractive longbow. 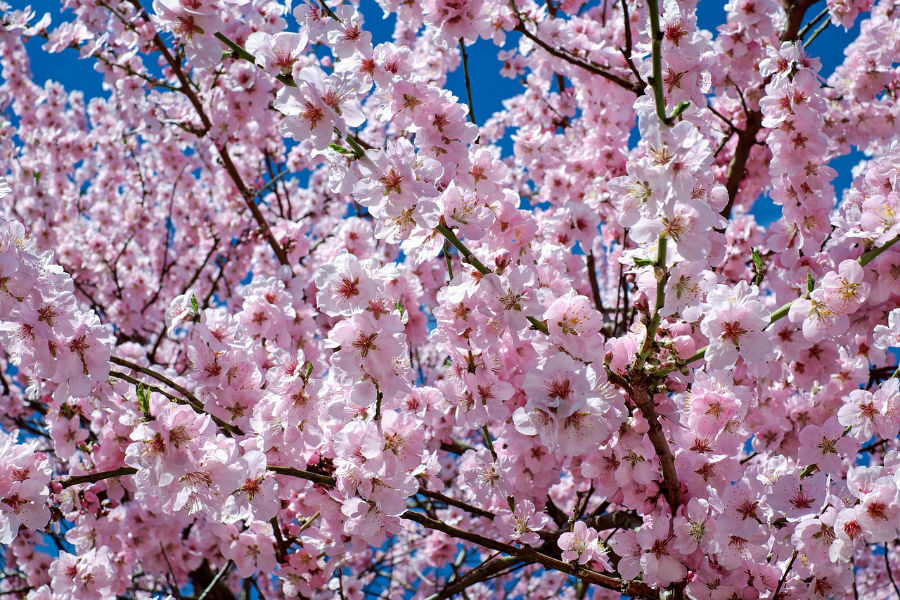 Just because you’re on a tight budget or have trouble finding cheap yet durable wood doesn’t mean you should only dream of making bows.

Even though the bows made from fruitwoods don’t look professional, they make a great serviceable stick shooting an arrow.

The broad limbed design of fruitwood flat bows has been shown to do its job perfectly.

No matter what kind of fruitwoods you decide to use for making a bow, be sure you’ll get a durable weapon.

The fruitwood bows are notable for their powerful compression and strong tension making it good for newbies. 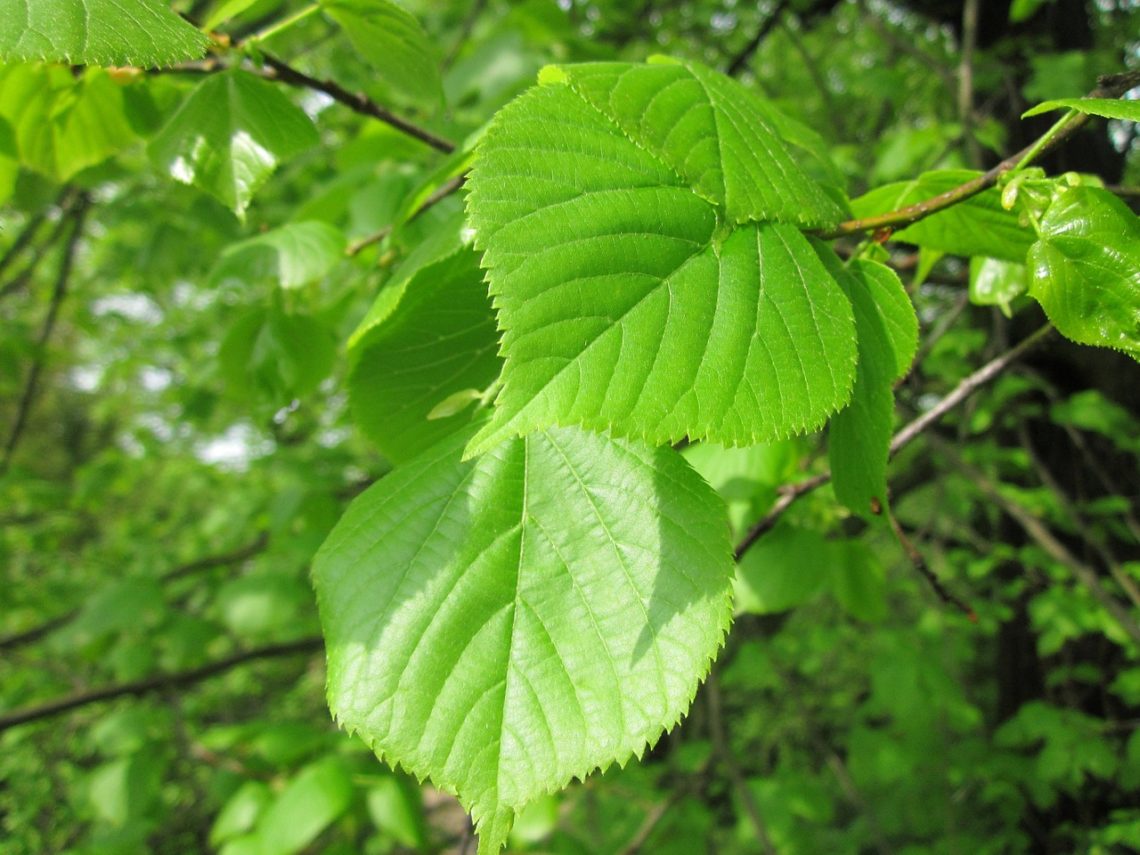 Many years ago the Welsh crafted their bows from Scotch elm or Wych elm and preferred short and stout bows that could be used in fights as a guerilla weapon.

The bows made from this wood were flat bows, broad-limbed, and in rare cases D-section longbows.

Wych elm bows were crafted from unseasoned green wood in a similar way as popular English yew bows. But such bows usually have a short lifespan and can break any time.

In very rare cases, bows made from wych elm have excessive draw weight. When first made, it might weigh up to 70lbs.

The weight increases as a bow dries and becomes crisper and fragile. Such bows dry fast and thus lose weight even faster.

What Woods Can I Not Use?

Be sure you stay away from softwoods, such as spruce, pine, cedar, and fir, which are too weak to withstand the bending and stretching.

The brittle exotic trees, including mahogany and teak, aren’t good for bow making, too.

Although those woods are strong and hard, they might become brittle in a while and collapse when bend.

With a wide diversity of the types of woods, choosing the best one can be difficult. What kind of wood is best for making a bow? It truly depends on your own needs.

Do your own research to understand which kind of the bow you’d like and which type of wood doesn’t make sense.

If you’re a beginner, it’s best to start with the cheap types of woods, such as fruit woods, red oak, hickory, and bamboo.

Once you master this craft, you can gradually learn how to make the bows that will cost you a fortune but serve you for decades.

Want to read more about archery? Check out our article on crossbows for deer hunting.