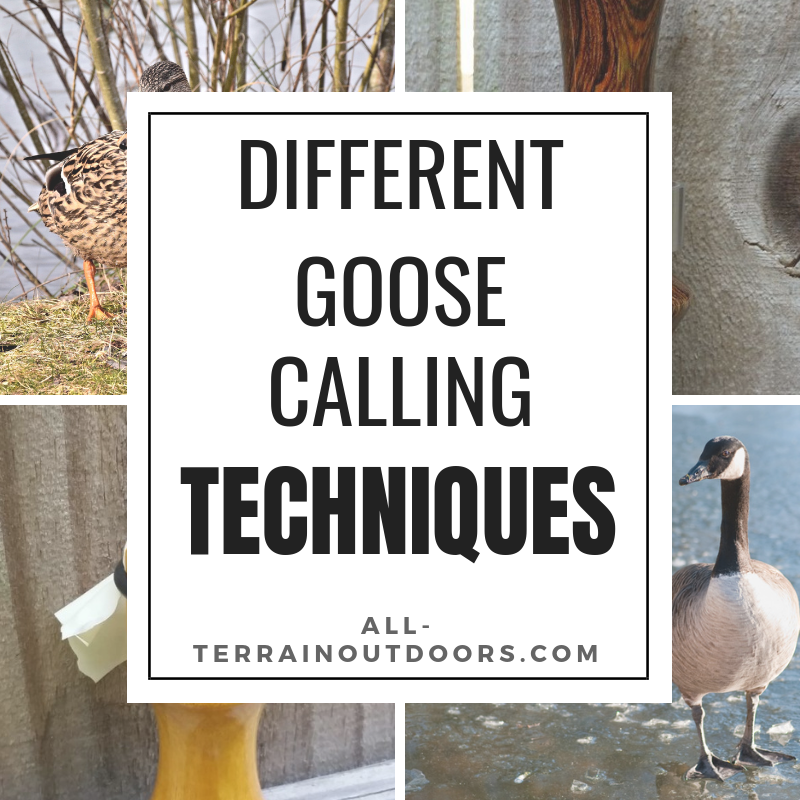 When it comes to hunting geese, each species of goose requires different goose calling techniques.

Most goose hunters know that each species of geese has its own goose specific language.

Each call conveys a specific meaning, such as contentment, excitement, or recognition.

Expert goose callers use various combinations of these calls to draw geese into their decoys or into gun range.

As many hunters have learned, you do not need to be an expert to call geese, but if you know what to say and when to say it, the more successful you may be.

For most goose hunters, the Canada goose is the king of the goose world.

The number of available goose calls and the overwhelming amount of time invested in designing the next “best” short reed Canada goose call speaks volumes about the appeal of these birds.

In most instances, the short reed goose call is the ideal tool for calling Canada geese.

The geese call, and you answer.

Many hunters start a goose calling sequence with hail calls or greeting calls.

The honk is a two-note sound that is made by saying “Goo-wit, Goo-wit” into the call.

Many times, hunters hit their calls too hard, too fast. In some instances, this can scare the geese.

Instead, give the approaching flock a couple of long-range honks, or hail calls, and watch for a reaction.

If the geese do not react, then begin calling faster and harder to convince them to come closer.

As the geese close the distance, begin lowering your volume and speeding up your calling.

When the big Canada geese are near, switch to clucks and double clucks.

Again start out with minimal calling and focus on producing realistic and natural clucks.

By opening and closing your hands, you can vary the tone and volume of the cluck like a real goose.

The double cluck is not a difficult call to make, but it does require practice.

Once the geese are committed to your spread, give them the confidence to finish by giving soft moans.

The moan is just a soft, drawn-out “oooo” sound.

A moan combined with a cluck is a great confidence builder.

If the geese begin drifting away from your decoy spread and calling, hit them with a comeback call. This is a pleading, begging three-note call.

To produce the comeback call, you say “To-it-ha” holding the not for a second.

The comeback call is given until the flock turns back towards you.

Once the geese turn back, switch back to clucking, double clucking, and moaning until the geese commit and come into gun range.

For years, these geese were considered small versions of big honkers, but in 2004, they were reclassified as a distinct and separate species.

Along with being a different species, these geese require a different calling style as well.

First off, these cacklers produce a higher-pitched language than the big Canada geese, and they like a lot of insistent calling.

By using a higher-pitched short reed Canada goose call and pumping a continuous volley of calls, you can draw these birds within gun range.

Lesser Canada geese are drawn more to the rhythm of your calling than to any one particular call.

Due to the larger flocks that lesser Canada geese fly in, these birds want to hear a large flock calling from the ground.

They like hearing the non-stop noise until they set down in the decoys.

If you back off of your calling too soon, they will get spooky really quickly.

The key to calling lesser Canada geese or Cackling geese is to read the birds and give them what they want.

Specklebellies, or specks, have quickly become a major contender against the big Canada geese in terms of hunter appeal. Specks are considered the acrobats of the air of the goose world.

Specklebellies, or specks, have quickly become a major contender against the big Canada geese in terms of hunter appeal.

Specks are considered the acrobats of the air of the goose world.

Watching a flock of Specklebelly geese drop into a decoy spread is like watching a group of kamikaze bluewing teal splash down in the middle of your spread.

Calling specks can be just as challenging as calling late-season call-shy mallards.

In most cases, it is better to focus on the birds you can actually call, such as lower flying birds, birds flying in an abnormal flight pattern, or singles.

When you see a flock of Specklebellies, give them a couple of two-note yodels and wait for a response.

You produce the two-note yodel by saying “Ta-ha” into the call.

If you get a response, immediately follow-up with an identical response.

If the birds are interested, they will engage the conversation and drift towards your decoys.

As with calling most waterfowl, less calling often produces better results. If the birds are working, give them just enough calling to keep them interested.

If the flock seems uninterested or begins drifting away, add more urgency to your calling.

Hit your call harder and faster with various inflections.

Switch between two-note and three-note yodels, as well as mixing in strings of feeding clucks followed by a two-note yodel.

The three-note yodel is made by saying “Ta-ha-ha.”

If they still do not respond, stop calling and wait on the next flock. If they do respond, repeat the same call that triggered the response.

Once specks are close and working, begin calling only at their tail feathers and wingtips.

This style of calling is ideal for “educated” Specklebellies in the South.

In other less pressured locations, a more aggressive calling routine can be just as effective.

As most hunters know, Snow geese and Ross’s geese fly in huge flocks, and in most instances, they are more receptive to a large decoy spread than to a single call.

Due to the huge amount of noise snow geese make, calling can be almost useless at times.

To increase your odds with calling, try to pick out a single bird and get it to engage your conversation.

Give the goose a couple two-note high-low calls.

If the snow goose responds, immediately call back to it.

If you can get his attention and turn him towards you, typically, the rest of the flock will follow.

Once the flock commits to your decoys, let the geese approach without calling. If the flock begins drifting away, increase your calling.

Continue the conversation by mimicking the same call, volume, and pitch.

Once the flock commits to your decoys, let the geese approach without calling. If the flock begins drifting away, increase your calling.

Speed up the notes, increase the volume, add in a lot of murmurs, and beg the geese to come back to you.

In many cases, multiple hunters calling at the same time can be more persuasive to the geese.

When calling Ross’s geese, you need to employ a different calling technique.

This sound is easily produced by restricting the airflow of a specklebelly call.

By choking off the exhaust, you can create the high-pitched chirp of the Ross’s goose.

Listen to the birds and repeat what they say.

As with calling ducks, the key to good goose calling is reading the birds and adjusting your calling technique to fit their needs.

Hunting pressure, weather conditions, and other variables can affect what the geese want to hear.

Engaging in a conversation with geese takes time, practice, and discipline, but the rewards can bring endless strings of geese sailing into your decoys.