You cannot wait to sit in your blind, dripping sweat, hoping to spot the season’s first birds.

The sweltering heat and relentless need for industrial-strength insect repellent make you question your sanity.

Then an energetic group of blue angels, flying at warp speed, appears out of nowhere, and you immediately remember why you are subjecting yourself to such torture. 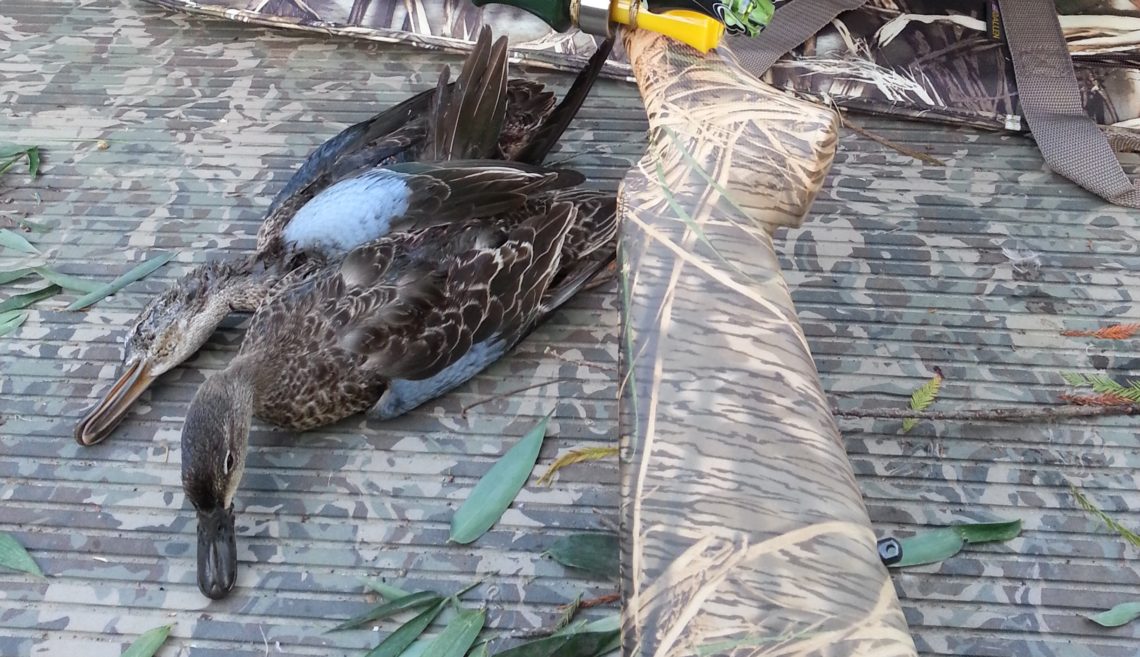 The first migration of ducks sets the stage for a long-anticipated game of chasing and outwitting very fitting adversaries.

Depending on your location, this short, early teal season is open for 9 to 16 days.

The majority of southern states have a September teal season, and more and more northern states are offering one as well.

I have hunted September teal in some strange places, and I have rarely been able to use the same approach more than once.

The important thing to remember is to not overthink these birds.

September teal season is usually a right place at the right time game.

If you can locate a prime area, the location will literally suck the teal from the sky. In some of my hunting locations, I have spent mornings watching groups of the teal tornado out of the sky into a spot a hundred yards away.

Then change locations the next morning and watch them tornado into the spot I hunted the previous morning.

These birds decoy well and respond quickly to calling.

A large decoy spread is not needed.

Teal decoy well to only a dozen or two strategically placed blocks.

When it comes to calling, the fast, raspy sound of the hen teal is unmistakable.

Combine this with the sharp peep of the drake, and you have a deadly and convincing combination.

The small size of teal make them appear to fly much faster than they really fly.

When it comes time to hunt early season teal, you better have put in plenty of time shooting skeet.

I have watched these feathered-covered footballs can make the best shooters hang their heads in shame.

The small size of teal make them appear to fly much faster than they really fly.

Add this fact to their erratic and unpredictable flight paths, and you have one challenging target.

The nimble flying skills of teal allow them to bank vertically after the first volley of gunfire.

So you must be prepared to quickly transition from the horizontal shot and swing your shotgun vertically towards the rising birds without ever pulling your cheek away from your gunstock.

Once you transition to the rising group, you will follow the classic swing through lead.

Once your barrel covers the duck, pull the trigger.

You can also gain another advantage by dropping down to No. 6 steel shot.

The smaller shot will give you a better pattern for these smaller birds.

The southbound September exodus of bluewing, cinnamon, and greenwing teal indicates the start of the impending waterfowl season across most of the United States.

The start of this avian migration fuels the fire in every duck hunter.

The thought of chasing these fast flyers causes a surge of adrenaline in even the most experienced hunter.

Keep in mind teal are different from any other ducks, and hunters must employ different tactics to ensure success.

With any style of hunting, scouting is one of the key requirements, but with teal, it is the most important, as they are creatures of habit.

Teal will often fly the same patterns each year.

They may not use the exact same feeding location, but they will return to the same general area.

Preseason scouting can expose the general areas where these early migrators are starting to appear.

This reconnaissance will allow you to pinpoint concentrations of teal.

It is the early morning scouting as the season gets closer that will reveal the specific feeding areas.

Discovering these specific areas will allow you to locate similar areas and build a game plan to follow the teal as they transition from one feeding location to another.

To begin scouting, you must identify locations which can provide the ideal conditions to support large concentrations of teal.

Those locations offer southern exposures with tall willows along the shoreline that provide protection from the cold north wind, a span of shallow water ideal for feeding, and a lack of flowing current to provide a relaxed setting.

When the teal appear, they will provide in-your-face fast action.

These birds will often work back and forth from one pond to another, with the highest activity rate taking place throughout the early morning and late afternoon hours.

When the teal appears, they will provide in-your-face fast action.

Some of my favorite places to hunt teal are backwater areas, sloughs, and bayous.

These areas offer an almost endless supply of marsh plant seeds and security.

These backwater areas are often undisturbed by other hunters, and they can produce daily limits of teal that are all too eager to decoy and respond to teal calls.

No matter the location, most every hunter will burn through a few shells before you finally connect will aerial daredevils.

Be prepared and take plenty of patience and shotgun shells.

Every experienced teal hunter has felt the shame of missed birds and the pride of connected shots.

All of this is part of the allure and fun of hunting these early season targets.

Wherever you hunt, these little footballs offer loads of challenges.

Before you take off to chase these early birds, it is extremely important to learn to distinguish teal from other early migrators, such as Northern Shovelers.

Being able to identify teal will keep you from having an unfortunate visit from the local game warden as teal are the only legally hunted waterfowl in many areas during this early season.

Bluewings have a chalky blue shoulder patch on the front of each wing.

The drakes are grayish with tan spots below, and they develop a white crescent-shaped stripe on the front on their head by early winter.

The hens are brownish-gray.

They have an erratic flight that gives the impression of high speed. Greenwing drakes have a brown head, a tan breast, and gray flanks.

By early winter, they develop a green stripe on the sides of their head and a vertical white stripe at the front edge of the flank.

Hens are a speckled grayish-brown.

They have an erratic, fast, and buzzy flight similar to that of agitated wasps.

The hens are light brown.

Both have a blue shoulder patch on each wing, and fly in small groups of paired birds. 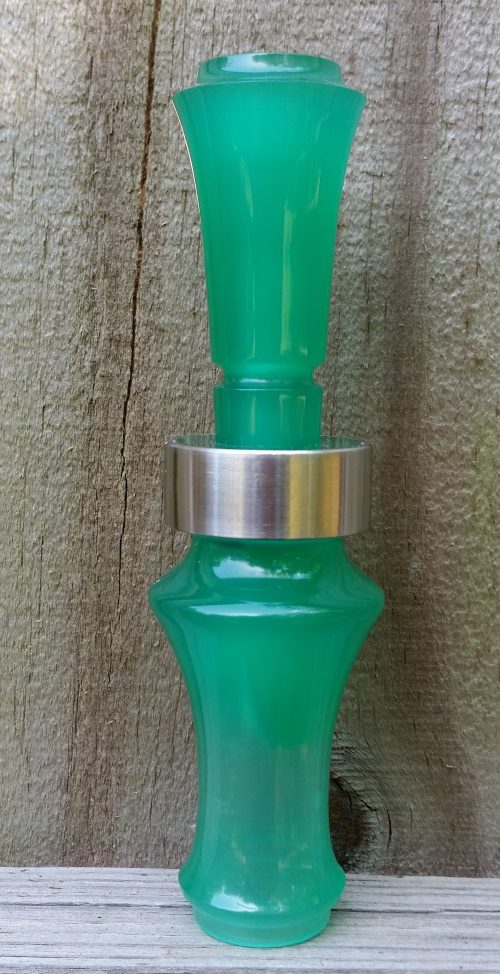 Due to the unsuspicious and trusting nature, teal respond very well to decoys and calling.

When setting up to hunt teal, let your area dictate your decoy spread.

A small area requires only a dozen decoys at most. In some instances, a half dozen will work even better.

In larger areas, you may need as many as three or four dozen decoys for the birds to even notice your spread.

Your decoy pattern is just as vital as the number of decoys.

Your pattern will direct the teal where to land.

The common decoy patterns, such as C, J, V, will direct teal to the pocket formed by the pattern shape.

Set that pocket well within shotgun range, and you will have the best opportunities for a clean harvest.

Like any normal decoy spread, use the wind to help direct the birds to the location you want them.

Put the wind at your back, and the teal will land towards you.

Teal respond to a call just as well or better than other duck species.

Like most other puddle duck hens, teal hens quack too, and they will respond to a mallard call as well.

Although a call tuned to produce the higher pitched, raspy, fast calls of a teal hen can suck them in like a vortex.

The same calls used for other puddle ducks, such as greeting calls, comeback calls, quacks, etc., work for teal.

A benefit for callers is teal respond very well to aggressive calling.

This gives the caller a little more freedom and a chance to experiment a little with their calling.

Teals Are Drawn To Decoys

For the most part, teal are easy to draw into the decoys, and most of your shots will be within 30 yards.

For these small, close-range targets, an open choke tube works much better than a restricted choke.

As you know, steel shot holds a tighter pattern than lead shot.

A good choke tube choice for decoying teal is an improved cylinder, but for passing shots, many teal hunters choose a modified choke tube.

Despite their small size, teal are tough little birds.

Higher velocity loads with number 6 or number 4 shot are ideal for these tough birds.

Using too large of shot size will destroy this fine table fare.

To improve your shooting skills and to prepare for these birds, spend some time shooting skeet.

Failing to mount your gun properly and quickly is among the worst shooting habits a teal hunter can fall into.

Put in the time, and get plenty of practice to close the deal when those teal pop into range, especially when you are not expecting it.

If you have not yet experienced the early September exodus of teal, you are missing out on an exciting and fast-paced hunt.

As table fare goes, a properly cooked teal is one of the most delicious ducks of all of the waterfowl species.